Motti Aviram is a leading figure in the Israeli children’s television industry. He has created a large share of Israel’s most successful and appreciated children’s TV series. He has also served as the head director and content editor of Sesame Street shows in Israel, and directed the Shalom Sesame series in New York (starring Sarah Jessica Parker, Jerry Stiller, Joan Rivers and many more). Later, Motti became the content director of Hop TV, Israel’s leading pre-school TV channel, and then established Subtext, a content company specializing in children’s television shows. Motti has served as a senior lecturer at the Bezalel Academy of Arts and Design, and at Israel’s School of Screenwriting. He recently participated in an international workshop for television and movie content editors, funded by the British Council.  Currently, he is the content director heading the creative team at Clasikaletet, a company specializing in the production and distribution of videos and books for children. Recently, Motti published: The Complete Guide to Screenwriting for Children’s Film & Television. A book aimed at people who want to specialize in script writing for kids. 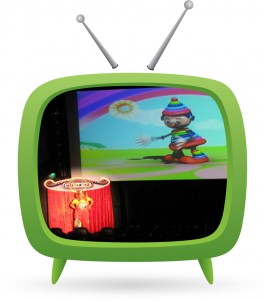 A first theatrical experience for toddlers.

The Gulgulnoa Show, which has been running for more than seven years so far, is a first theatrical experience for toddlers.  Gulgul is a three-dimensional character who is projected onto a big movie screen above a theater stage. He conducts an interactive dialogue with the young theater audience, and also with Noa, a human stage actress who stands beside the cinema screen. The show incorporates singalong songs, magic tricks and an audience participation quiz with an animated feature film.  Gulgul and Noa help the audience understand and process the content of the film. 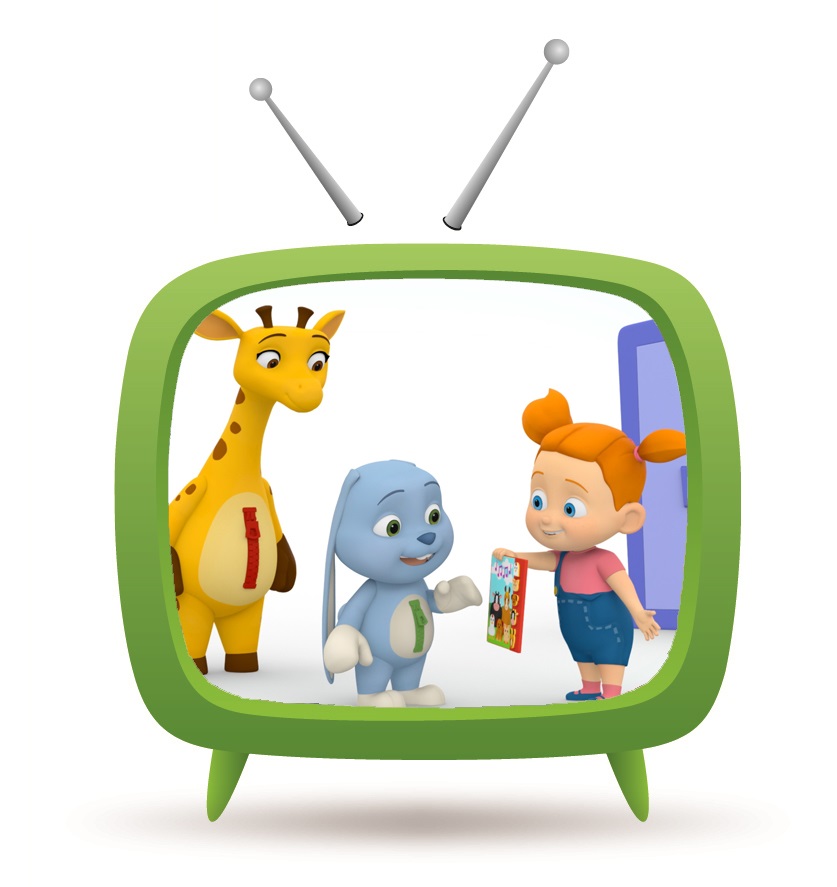 Head writer of Nuni. A CGI animation series made for Twist Productions. (An international YouTube TV channel) Nuni and her two best friends, a giraffe toy puppet and a rabbit toy puppet, are dealing with a wide range of issues such as; how to overcome fear from a dogs, or what to do when you are lost, or how to find a toy that has disappeared… 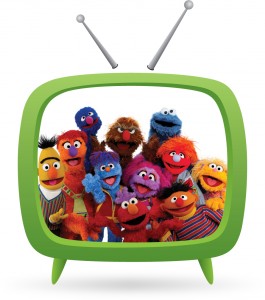 Rehov Sumsum, the Israeli version of Sesame Street, is produced with the assistance of the American show. It is a curriculum-based show featuring a wide range of educational segments, with a strong visual style that includes fast-moving action, humor, and music. Each episode alternates ongoing live actor story segments and puppet sketches, short live action clips, animated clips, and children’s music videos. 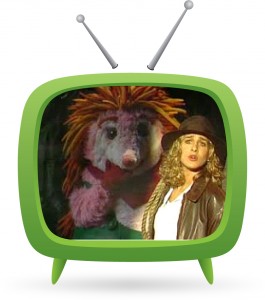 Shalom Sesame is a twelve episode series of Rechov Sumsum made for American audiences. Filmed in Israel and NY, the series starred Sarah Jessica Parker, Jerry Stiller, Joan Rivers and many more… 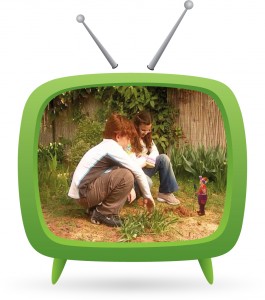 The Magical Songbook is a musical singalong children’s show. Hanny Nahmias – A singer and her three little friends, three animated musical notes, live together in a magical songbook. Taratatam – A mischievous little elf, who hates songs and music, tries to use his tricks to stop the singing friends but his conspiracies are always exposed and the friends manage to sing every time, despite his machinations. 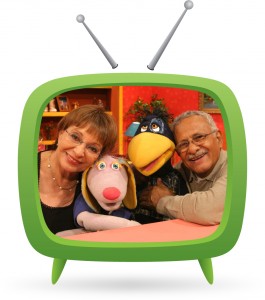 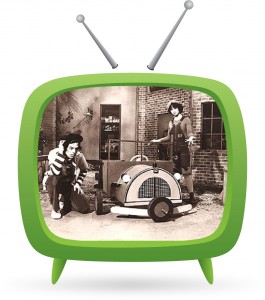 Pistachio and his friend hang-on, a pair of innocent and childlike characters, discover the world around them together. They learn and review the rules of our globe through exploration, experience, and silly mistakes. 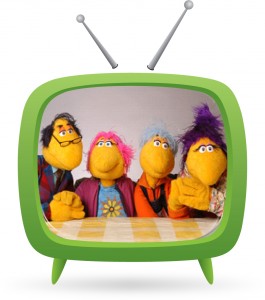 The Kunzonim is a sitcom for toddlers. It has been airing since 2004 and has gone through multiple seasons.  A family of puppets deals with the everyday problems familiar to children. These include fights among siblings, jealousy, problems in kindergarten (or school), chores at home, and more. 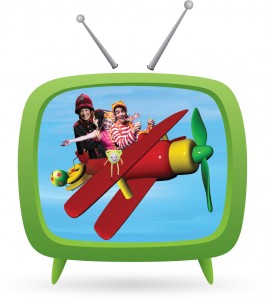 Eeny Meeny Mo is an English teaching series for young children. The magical story begins when two little kids flying in a toy plane are forced to land between the pages of a giant pop-up English book. The book comes to life, and Meeny and Mo start a magical journey through the pages of the book, while absorbing many new English words on the way. 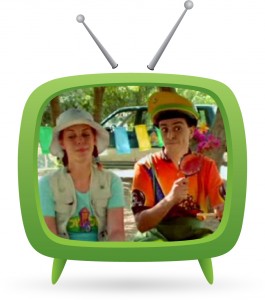 Little Trips is a series for kids that deals with our environment. Tali, a charismatic red-haired tour guide, is “assisted” by the devoted Right Away, who is actually very good at complicating simple things. They take their young audience on daily trips in which they learn that the quality of life in our vicinity is definitely in our hands, and that everything depends on how we nurture and keep the environment in which we live.

Alan the All Mighty 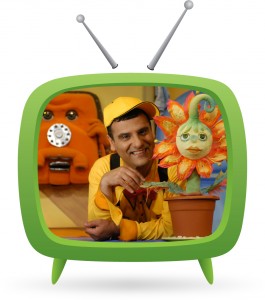 Alan The All Mighty

Alan the All Mighty is a reading readiness series for kids. The plot of each episode is motivated by misunderstandings that arise for a variety of reasons, such as a faulty telephone connection, words with double meanings, homonyms and more.  The hero of the series is Alan the All Powerful – a superhero with no superpowers at all…

The School Bell Rings for Me 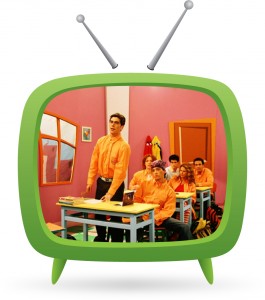 The School Bell Rings for Me

The School Bell Rings For Me is a TV sitcom series for teenagers The live action series incorporates cartoonish sets and situations in short sketch format. It features stereotyped students along with their childish principal, their insane psychological counselor, the sadistic school nurse, the beautiful manipulative class queen, the naive custodian and more. 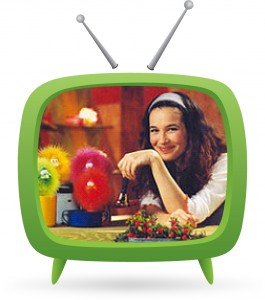 The Blah Blah Tree is a series for preschoolers hosted by Yael Abecassis, and a bunch of colorful, laughing, furry creatures who talk only in rhyme and invent “Nonsymes” (nonsense rhymes).  The series was written by the famous Israeli writer and poet, Datia Ben-Dor. 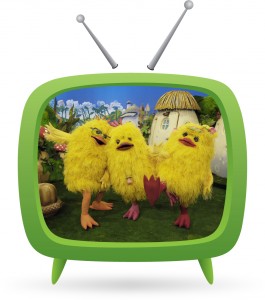 Tweet Tweet takes place in a small courtyard which is home to three little chicks. The main idea of the series is to create, supposedly, a world of children without the presence of adults. (An older mole occasionally emerges from his burrow to represent the adult world from time to time.) The series imparts social skills, such as the ability to play together, to share, to take into account the needs of others, and more, to its viewers. It is geared to empower children to have faith in their own abilities, intelligence and feelings. 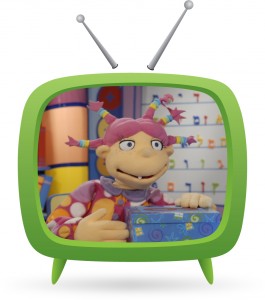 Hello First Graders is designed to prepare kindergarteners for their first year of school. All the characters in the series are puppets that represent children. The series looks like a grownup television talk show, with live correspondents in the field who visit the school and report live about what’s happening in the classrooms and in the school’s playground. The series helps develop emotional skills, mathematical thinking, scientific thinking, and literacy to prepare its viewers for the first grade. 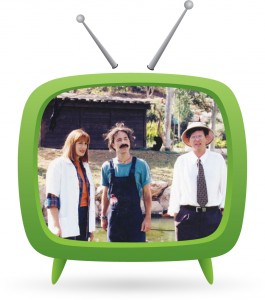 The Zoo Chornicles is a 26 episode drama series aimed at teenagers and situated in Jerusalem’s Biblical Zoo. The series’ main characters are the zoo veterinarian, the chief caretaker of the animals, and a reporter who writes a column called “The Zoo News” while hoping for a job at National Geographic. The series is a semi-documentary since all the plots are based on events that really took place in the Biblical Zoo. 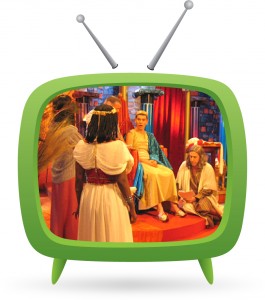 King Solo Man is a 26 episode sitcom for Teenagers, that takes place in biblical times.  The main goal of the series is to present its viewers with different science topics in a variety of fields.
The series takes place in the palace of King Solomon, the wisest man on earth. Solomon is also the supreme judge of his kingdom whose courtroom presents him with the many legal problems that fuel the various plots of the series. The main characters of the series include King Solomon; Sir Brobottom, his conniving adviser; Buzi,a periodic mafioso; and Dahlia, a pretty young waitress who works in the palace’s coffee shop. Dahlia is willing to accede to Solomon’s attempts at wooing her, on condition that he agree to divorce his thousand wives first. 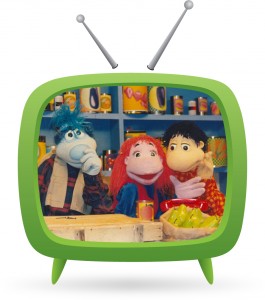 Chocolate, Oops and Toffee are the three puppet presenters of the Telad Network’s children’s morning show.  They host a variety of guests whose occupations would interest children, including toy manufacturers, balloon artists, chocolate makers, and more.  In addition to the interviews, the puppet presenters find themselves involved in many unexpected and amusing adventures in every episode. 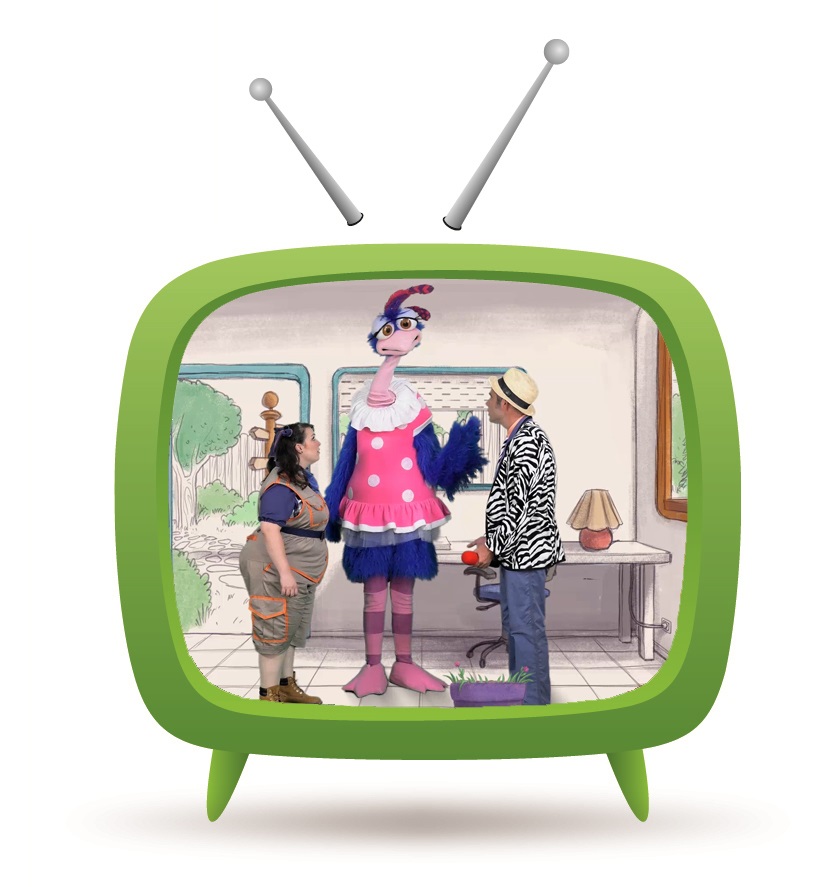 Creator, director and head writer of “Freddy’s Zoo” – a Puppets & human Children’s television series. Freddy’s Zoo, is a very small zoo (Which is characterized more like a small kindergarten) The series is filmed in a virtual animated set, and includes interactive sing along songs for kids.